In the town of Bjerringbro in Denmark, surplus heat from an industrial plant in the city centre is utilised in the local district heating network. The surplus heat is available from a ground water cooling system, from where heat is extracted and boosted in a heat pump before it is fed into the system. To obtain a high efficiency of the heat pump, a pilot study was carried out, to test if it would be possible to utilize supply temperatures as low as 47°C in the district heating system. The test was carried out in an area with 21 single-family houses constructed around 1980. A picture of the houses is seen in Figure 87.

The district heating network in Bjerringbro is normally operated at annual average supply and return temperatures of around 70°C/40°C. When the supply temperatures were lowered, the single-family houses were therefore equipped with one of five different domestic hot water substations including electric boosting: a small booster heat pump, a domestic hot water tank with immersion heater, a district heating storage tank with an immersion heater, or a combination of a heat exchanger and a local direct electric booster at the tap. Based on measurements and theoretical evaluation of the local units, it was found that the most feasible substation layout for this type of network was the installations of a heat exchanger combined with a direct electric booster at the tap (Yang et al., 2016). The main reason for this was that the installations had much lower heat losses and needed a much smaller supply of electricity to ensure comfort and safety requirements for domestic hot water. Furthermore, the installation is both cheaper and less space consuming than the alternatives.

Apart from the installation of domestic hot water boosters, no changes were made to the existing single-family houses or space heating installations. None of the occupants complained about problems maintaining thermal comfort in the houses, despite of the fact, that the existing radiator systems where supplied with supply and return temperatures with an annual average in the range of 45°C/ 30°C (Østergaard & Svendsen, 2017). 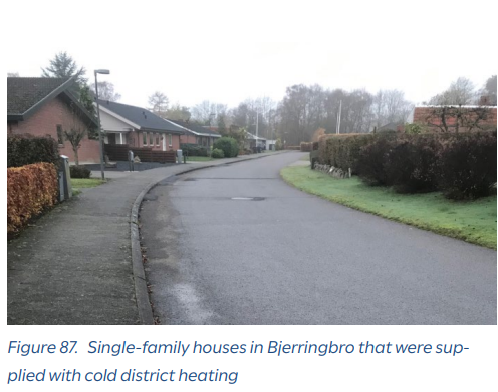 During the test, the central heat pump in the district heating system obtained COP-values in the range of 3.35–5.04 (Yang & Svendsen, 2018). Due to the low heat density of the area, it was found that the district heating operation with lower temperatures would be favorable for the efficiency of the distribution network and would also be economically viable due to availability of cheap surplus heat.