Commission’s package - List of relevant measures for the DHC community

The European Commission released yesterday the REPowerEU communication setting out a detailed plan to phase out imports of Russian gas to Europe before 2030.

Following up on the Communication published early March, the new REPowerEU package reflects a growing awareness of the Commission in the ability of our sector to cut gas use on the heat market.

Please see below for the complete list of measures. Key wins for district heating include:

Under the section dealing with the need to boost renewables, the documents says: ‘Member States can accelerate the deployment and integration of large-scale heat pumps, geothermal and solar thermal energy in a cost-effective way by:

Under Energy Saving, the Commission distinguishes between short-term measures (awareness raising and incentives) and mid-to-long term measures. The bunch of proposed new measures includes a legislative proposal to increase the energy efficiency 2030 target which could trigger new opportunities for our sector as the Commission also suggests measures such as phasing out subsidies for fossil fuel boilers and support for connection to DH and deployment of heat pumps. The Commission also announced it will propose new eco-design requirements to ban new fossil fuel boilers from the market starting in 2029.

Under financing, the new guidance document on RFF references the use of funds for DH using renewable and waste heat. In spite of this positive reference, we will need to work further on a simpler access to funding  for our projects, as our members have reported problems to make RRF work for the growth and modernisation of systems.

Europe has known in the past some energy supply crises. The current events have led to new measures to accelerate the pace of the energy transition. The good news in this situation is the proven ability of our sector to phase out individual gas boilers with efficient and renewable solutions – RES heat, waste heat, CHP and power-to-heat solutions including large heat pumps and thermal storage.

The Secretariat will keep liaising with Commission services and work together with members to exploit opportunities that will arise from the implementation of REPowerEU.

Annex: REPowerEU measures (most relevant for our sector)

This publication is also available here in PDF format.

The tragic events occurring in the eastern part of the continent have severely threatened EU energy security, due to the high dependency of many countries on Russian natural gas. To break free from fossil fuel imports and accelerate the decarbonisation of Europe's heating sector, we must massively deploy homegrown and sustainable heating solutions. Locally owned and a flagship of the European energy industry, district heating is a critical piece of the equation.

Until the next winter, the strongest options available lie in changing consumer behaviour to reduce heat demand and strengthening the EU and international energy solidarity. Nevertheless, much can be achieved in the next 2 to 5 years to modernize and expand district heating networks, accelerate the deployment of new projects and integrate larger shares of renewable and waste heat in district heating and cooling.

Why is DHC important for REPower EU?

District heating has immense potential to grow in Europe: recent research underlines that it could supply 50% of Europe’s heat demand by 2050. The remaining 50% are met with heat pumps in areas with a lower density of population.

District heating is a proven solution to phase out fossil heating (natural gas, oil and coal): Renewable and waste heat sources represent nearly a third of the energy supply used in the DH sector and can grow much further. Up to the 25% of district heating could be supplied by industrial waste heat and more than 10% of the EU’s total energy demand for heating and hot water could be met by heat from data centers, metro stations, tertiary buildings, and waste-water treatment plants. A recent assessment by Agora Energiewende with the support of Artelys, TEP Energy and Wuppertal Institute found that district heating has a technical potential to achieve around 125 TWh (≈12.5 bcm) in gas savings by 2027.

In the near term, behavioural change is critical as well as strengthening Europe’s internal and international energy security.

In the near term – from now until next winter, the key actions to cut gas consumption are mostly related to customer behaviour and necessary increased cooperation at EU and international levels to secure diversified and alternative energy sources. The capacity for operators to switch fuels is limited in reality, as new supplies would require establishing in a rush new supply routes and storage facilities (e.g. switch to biomass or to solid fossil fuels).

In the next 2-5 years, we can roll out massively sustainable district heating & cooling systems, accelerating the decarbonisation of Europe’s heating sector and cutting gas dependency.

Under this time horizon, the District Heating sector can bring a strong contribution with the densification of existing networks and converting existing plants to alternative renewable and waste-heat sources.

The adoption of ambitious provisions on heating and cooling within the Fit for 55 Package – in particular RED, EED, ETS, EPBD – will be critical in driving the expansion and modernisation of efficient DHC in the next 5 years. Nevertheless, concrete additional measures can be undertaken to further unlock the potential:

20 years is a more appropriate timeframe to achieve the complete phase-out of fossil fuels on the heating market.

The focus of this paper is the contribution of our sector in the mid-term. As demonstrated by some countries (e.g. Nordics), a solid policy framework for sustainable district heating can phase out the use of imported fossil fuels thanks to the use of renewable and waste heat combined with efficiency measures. Austria is a recent example where policies have driven the uptake of renewable heating – the evolution of the share of buildings connected to DH 2000-2019: +120 %. A full overview of the scale of the challenge, and the necessary investment costs were provided in the above-quoted Heat Roadmap Europe project (2019).

Annex I: Evolution of the fuel mix in Swedish District Heating 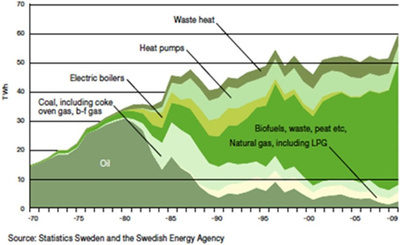 Euroheat & Power signed an open letter together with more than 124 business leaders and 27 associations to call on the EU Commission to strengthen energy security by accelerating green transition, ahead of the publication of the REPowerEU Plan. The letter, an initiative from the Corporate Leaders Group (CLG), addresses the President of the Commission Ursula von der Leyen and recommends to:

In order to make this happen the letter highlights the need to provide the right financial incentives and instruments to accelerate investments by investors, companies and households, mobilise existing EU funds and accelerate the provision of new training schemes.

Regarding the decarbonisation of heating and cooling, the letter calls on to connect buildings to efficient DHC and ensure that electric and low carbon thermal options are cheaper to run than fossil-fuel alternatives.

Finally, the annex to the letter provides some concrete solutions that are already implemented by some of the signatories, including EHP members, to reduce dependency on Russian fossil fuels.

Following the publication of the ‘fit for 55 package’, the European Parliament and the Council of the EU have been working on their positions.

During the past month, members of the ENVI committee negotiated ‘compromise amendments’ that could be supported by a majority of political groups during the vote in committee. This was an intense and difficult work resulting for instance, in 33 compromise amendments over more than 200 pages, covering many aspects of the EU ETS. There were some deep divisions between the political groups. For instance, one important aspect for the sector, the EU ETS2, introducing a separate, self-standing emission trading system for buildings and road transport adjacent to the current ETS system, was heavily negotiated, given its potential social impact.

On 16 and 17 May 2022, the ENVI Committee adopted it draft report on the European Commission proposal on the revision of the EU ETS of the and its opinion on the biomass aspects in REDIII.

ENVI voted in favour of the inclusion of municipal waste incineration into the ETS as of 2026 with an assessment to be done by the European Commission, by 31.12.2024. The impact assessment should focus on possible measures to avoid diversion to landfill including considering the inclusion of landfill into the EU ETS. This agreement between political groups was found rather early and broadly supported, despite this provision not being included in the Commission’s initial proposal and thus not included in the impact assessment for RED.

Regarding the EU ETS2, the ENVI Committee adopted a watered-down approach, product of a compromise with left leaning groups that were first opposing the ETS2. According to the ENVI position, ETS2 would be first introduced for commercial heating from 2025 and then for households from 2029, pending a positive assessment of the European Commission looking at energy poverty, cost pass on mechanism, investment. Member states would have the possibility to opt in the residential sector before 2029. Another key point of the compromise is the introduction of a 50% limit to pass on the costs of allowances to customers for residential sector. Last but not least, a transitional price cap of 50€/ton CO2 is proposed to be introduced, with possibility to reassess the situation in 2029. The rapporteur was unsatisfied about the distinction and delay in implementing the ETS2 for household but expressed his satisfaction to have ‘saved the ETS2’.

EHP will further work with MEPs ahead of the Plenary vote in the European Parliament on 7 June and with the Council to obtain a meaningful price signal while encouraging member States to protect the most vulnerable citizens with additional measures.

Regarding the opinion on REDIII concerning biomass, the ENVI Committee went much further that the Commission, putting stark limitations on the use of woody biomass for energy, by 1/ banning subsidies for primary biomass, 2/ preventing primary biomass to count towards the renewable target (only to mention the most worrying measures). As it is proposed to be defined by ENVI, primary biomass encompasses all wood obtained from removals, including branches, roots, stumps and burls, except removals due to wildfire prevention and pest.

EHP will further work with MEPs ahead of the Industry Committee vote (lead) in the European Parliament on 13 July and with the Council to balance the ENVI position and prevent damaging provisions to make it to the final text.

In an article published in the Euroheat & Power International Magazine’s latest edition, Giulia Forgnone and Pauline Lucas provide an overview of the challenges and opportunities for the district heating and cooling sector under the Fit for 55 Package and, specifically, on the proposals to revise the Renewable Energy and Energy Efficiency Directives (RED & EED). They outline the potential implications these texts could have on the EU DHC sector.