A new boost for Renewable Heating and Cooling

The kick-off meeting of the new support project for the European Technology and Innovation Platform on Renewable Heating and Cooling (ETIP-RHC) was organised on 8 September 2022 in Brussels and brought together the partners of the project (EUREC, SHE, EGEC, EHP, EHPA, WIP) and two representatives of CINEA and DG RTD. 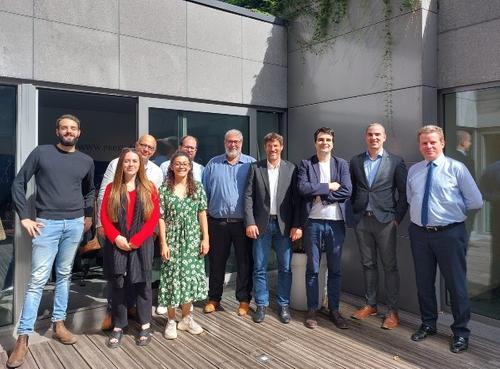 The new three-year project, funded by the European Union, aims at supporting the work which has been carried out by the secretariat of the European Technology and Innovation Platform on Renewable Heating and Cooling since 2009.

This project keeps the emphasis on the need to enlarge the membership of the RHC-ETIP by involving more closely policy makers and RHC stakeholders on the national level, as well as other relevant stakeholders (i.e. new markets for the H&C demand side, and socioeconomic experts) in its work.

This new project also adds stronger emphasis on the RHC industry through planned establishment of RHC Accelerator and the development of the RHC industrial strategy. By supporting interactions between the many stakeholders representing industry, research and academia, from different renewable heating and cooling technologies, and by further inclusion of complementary sectors and expertise, the Secretariat of the RHC-ETIP will assist the RHC sector in strengthening its growth and competitiveness both vis-à-vis traditional heating and cooling technologies, as well as with respect to other RES energies and competitors coming from non-EU countries.

The role of the secretariat is to assist the stakeholders of the RHC-ETIP in coordinating activities related to the implementation of a research and innovation strategy to increase the use of renewable energy sources for heating and cooling in line and supporting the targets set by the European Green Deal, as well as to foster the growth and the market uptake of the RHC technologies.

The secretariat contributes to the structure of the RHC-ETIP, by organising meetings, events, and relevant consultations, by assisting with the preparation of relevant documents (both of technical and of political nature) to raise the profile and importance of the renewable heating and cooling sector, and its related technologies, and by acting as a link between the RHC-ETIP and the European Commission. It also provides consensus- based strategic advice to the SET-Plan and will play an active role in the planned update of the SET-Plan in 2022. 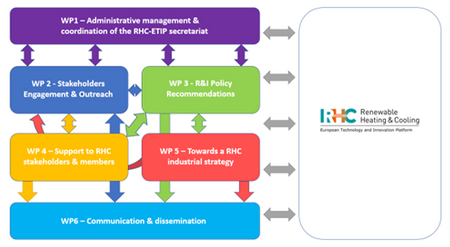 The European Commission renewed the funding for the ETIP in October 2022, for the next three years. DHC+ will launch a RHC accelerator to enable developers to scale up projects and reach bankability faster. DHC+ will also coordinate the organisation of national roundtable events, to engage with national stakeholders; and support the development of a RHC industrial strategy.

Challenges and opportunities for the RHC sector

Each year, almost 50% of the final energy consumed in Europe is used for heating, cooling or refrigeration either for residential, tertiary or industrial purposes. The vast majority (around 75%) of this energy demand is met by the combustion of fossil fuels such as oil, gas and coal, while only ca. 19% is generated from renewable energy. This deficiency in terms of renewable heating and cooling generation has been put in the spotlight amid the currently ongoing energy crisis, forcing European countries to scramble for alternative solutions for providing heat for households and industry. This crisis underlines the neglect of investment in H&C solutions the sector has been facing in the past years. With Europe facing one of the biggest challenges it has faced in recent history, there is also an opportunity to focus on and invest heavily in H&C solutions and position them at the forefront of the climate-neutral Europe.

“Heating & cooling has been rather neglected on the political level for years until now, but this is currently changing as we read about the urgency to swiftly implement the transition to renewable forms of heating and cooling in the newspapers almost every day. There is a great challenge ahead the sector and it is really good that the RHC-ETIP platform continues to operate.” (Dominik Rutz, the Chair of the RHC-ETIP)