The four 2015 Global District Energy Climate Awards were revealed on 27 April in Tallinn, Estonia, during this year’s Euroheat & Power Congress. The finalists were selected from those who best articulated their ambition and aspirations for District Energy performance improvements.

The Awards Ceremony was moderated by Christian Oliver, EU correspondent for the Financial Times. Françoise d’Estais, Head of Unit Finance of the United Nations Environment Programme held a keynote speech, underlining the importance of District Energy, especially for cities. Robin Wiltshire, Chairman of the Evaluation Panel and Chair of the International Energy Agency’s District Heating research programme, announced and congratulated the winners. 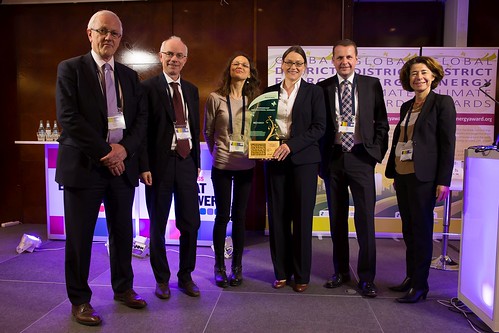 “In Braunschweig we strongly rely on cogeneration, since the combination of heat and power production is both climate-friendly and efficient. The Global District Energy Climate Award for our new combined heat and power plant based on renewable biomass fuel confirms our conviction that we are following the right path. The German Energy Transition focuses essentially on renewable power. Still, renewable-based heat generation should be further built up, as nearly 57 % of the energy consumed in households is used for heating and hot water. This award will help us communicate our vision, and incentivise us to take new initiatives.”
Julien Mounier, Director of Business Line Energy, Veolia Deutschland

Modernisation – category recognising the District Energy system that had the most positive impact in terms of effectiveness and efficiency after implementing technical, managerial, or operational modernisation aspects: Lodi District Heating System (Lodi, Italy). The modernisation of the Lodi District Heating system demonstrates an integrated approach that has secured an all round increase in system efficiency and reliability. Specifically, the integration of renewable resources, a reduction in heat supply temperature, better controls, and the addition of thermal storage have all combined to improve operation.

“We are really proud and honoured to receive this Award. In the last years, we have implemented a modernisation programme that involved many successful projects, with a great effort of the whole District Heating team. Applying for the GDECA was the best way for sharing our experience. At the moment, we entered a new phase, with a new expansion programme that started in 2014 and will continue in the coming years: the target is doubling the network size compared to 2013. We hope that this Award will be a proof for our potential new customers that, by supporting the expansion of District Heating, they can have an active role in improving environmental sustainability.”
Luca Vailati, District Heating Manager, Astem Gestioni

“I am so pleased that we’ve been able to demonstrate yet again what a globally unique district heating and cooling system we have in Helsinki. We have recently launched our new company brand Helen and introduced a customer promise “World’s best city energy”. That crystallises our mission towards the community we serve. Based on this recognition, we can really say that our system is the best in the world and that encourages us to reach even further.”
Marko Riipinen, Director, Helen Ltd

“District Energy helped to improve energy security as well as reduce local air pollution caused by the combustion and transport of imported fossil fuels. More recently, Helsinki has been implementing a District Cooling system that relies on absorption chillers to use waste heat from cogeneration plants that was previously underutilised during the summer months.”
UNEP (2015), District Energy in Cities: Unlocking the Potential of Energy Efficiency and Renewable Energy

“The geothermal project in Kirchweidach is the result of a great joint effort from our citizens, both the local and the Bavarian administration and from the companies involved. This Special Award is the best motivation possible. Climate change is a global phenomenon, but we need to invest in energy reform on the local level to achieve sustainable development.”
Johann Krumbachner, Mayor of Kirchweidach

“After all the efforts in our community to realise this project, this Award is of great importance for us. The energy coming from the geothermal resource is so far underestimated as a major source for renewable energy in Germany. And it is not only about sustainability and energy efficiency, the District Heating system we have built has a very positive impact on the economic development of our region. We have created jobs and growth thanks to green energy.”
Marcus Hansen, Managing Director, Kirchweidacher Energie GmbH (KiwE)